To purchase with prescription lenses, complete your order here.

The collaboration began with a chance meeting inside one of the ALEXANDER DAAS Opticians stores in Larchmont Village, Los Angeles, where Nina and Alex connected over the idea to create a customized lens color to express her personality and transition from Chicago to LA. After months, they created the perfect lens design matched to a complimentary frame shape getting her fitted into a sunglass that has gotten more attention than any other she has worn in the past. The collaboration was destiny and at that point just a matter of time. Order your 'CHI-TO-LA' sunglasses here, and learn more about inspiring media personality, Nina Chantele, below. 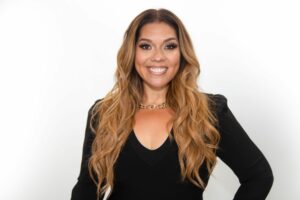 Regarded as one of L.A.s brilliant forces in broadcast radio, Nina Chantele is one of the most trusted voices in pop culture having served as a radio personality for over 18 years.  An Emmy-nominated powerhouse, Nina bridges communities who share a love of music, fashion, culture and healthy living; as well as serving underprivileged children. From her humble broadcast radio beginnings in Chicago, her time at 103.5 KISS FM and WGCI-FM (Chicago, IL), 103.5 The BEAT (Miami, FL), and REAL 92.3 (Los Angeles, CA) to her current time at 104.3 MYfm in LA, JAMN957 in San Diego, and iHeartRadio nationwide, Nina has been a voice for - and given a voice to - the Latina perspective on popular culture.  Nina has facilitated conversations with some of the world’s most iconic personalities including Katy Perry, Dwayne Wade, Enrique Iglesias, Tyra Banks, and Mayor Rahm Emanuel, and emerged as one of the industry’s most sought-after brand influencers, working with Mercedes Benz and Grey Goose Vodka. She has been a co-host on Chicago’s daytime television program Windy City Live, a guest contributor on the Dr. Oz Show, and a backstage award show host at the Grammy’s and MTV Video Music Awards.  Nina was also the voice behind Sean Diddy Combs’ successful marketing campaign for his cologne, Unforgettable, and is a current ambassador for The Boys & Girls Club of America. In 2018, she was named the official voice of the LA Dodgers and LA Clippers broadcasts on AM 570 LA Sports.  Nina continues to blaze new trails. And in a market where Latinos dominate the fandom experience for these professional teams, her bilingual skills, love of sports and energetic personality won over tens of thousands of sports fans all year long!  Alexander Daas is proud to call Nina Chantele a partner in the NINA CHANTELE by ALEXANDER DAAS collaboration.